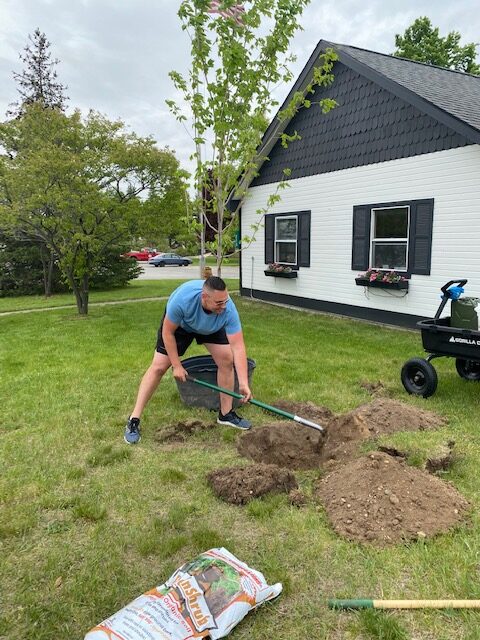 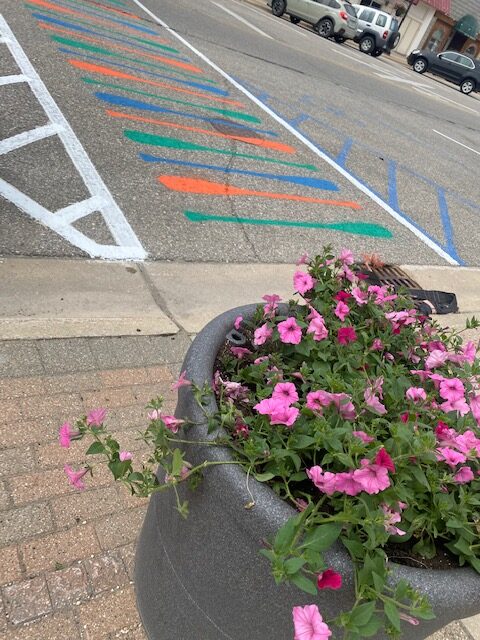 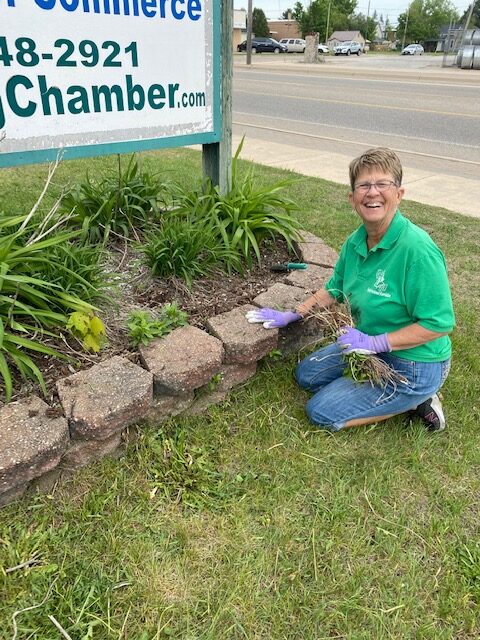 Volunteers from the area joined forces with workers from the Grayling Department of Public Works on May 25 to tackle various tasks throughout Grayling’s downtown district. Meeting on the lawn at Huntington Bank for a quick check in, volunteer teams then got to work planting trees, weeding various spaces scattered through the area and removing trash from parking lots. DPW started at sunrise, blowing the downtown sidewalks clear, running the street sweeper, bringing out the pots and hanging baskets to prepare for flower plantings, and then prepped the island at the start of the 100 block for sod installation. Volunteers were treated to a delicious lunch prepared by Doug Baum, City Manager. The afternoon portion of the work day got rained out, but much was accomplished. Different volunteer and community groups were represented on the volunteer team, including the city council, Grayling Promotional Association, the Grayling Heritage Committee, Grayling E-Free Church, Grayling Rotary, and Grayling Main Street.

One week later on June 1, additional volunteers repainted the canoe paddles in crosswalks on Michigan Avenue and Peninsular and also at the Norway cross walk in front of Michigan Brew. Members from the Grayling Promotional Association planted hundreds of flowers in the baskets and pots lining Michigan Avenue and the I-75 Business Loop.

The Downtown Spring Clean Up is an annual event coordinated through Grayling Main Street. Projects that take place during the spring clean day signify larger programming and community collaboration at work.

The island prep work taking place is part of a collaboration between Grayling Main Street and the Grayling 150th Heritage Committee, which is focused on helping celebrate Grayling’s 150th anniversary. The island is undergoing work to prepare for a brand new city clock installation, which was purchased as part of a Vibrancy Grant funded by the Michigan Economic Development Corporation through Grayling Main Street. The clock is being dedicated as a gift to the city and its residents to mark Grayling’s sesquicentennial anniversary. A clock dedication ceremony will be taking place on June 10 at 6 pm, followed by a block party downtown.

The flowers that bring Grayling’s walkways to life is a longstanding partnership with the Grayling Promotional Association and Grayling Main Street. Our community has become known for these incredible floral displays, artfully lending themselves to the district’s marketing intention of being Michigan’s Most Colorful Rivertown and creating a positive conversation regarding the city’s look.. Members of the Grayling Promotional Association’s beautification committee work with Grayling Greenhouse each fall to secure the right amount of flowers and schedule delivery just in time – always after Memorial Day in case of frost – and look forward to spending an afternoon planting the flowers. The flower pots and baskets will be watered regularly by Greg Nelson.

City councilman Jack Pettyjohn, co-chair of the Grayling Heritage Committee and Grayling Main Street,piloted tree plantings, funded by a generous donation from the Rotary of Grayling. Nine trees were planted in various locations around Grayling, including in front of Michelson Memorial Church, the greenspace next to Spike’s, and in front of the Chamber of Commerce. More trees will be planted in the fall.

Grayling Main Street mission is to be an economic development program that uses historic preservation and community collaboration in Downtown Grayling to promote our artisan and great outdoors recreational resources. The vision of Downtown Grayling is to be an economically viable district, supported by the business community, that is aesthetically engaging and encourages a grand sense of pride in residents.